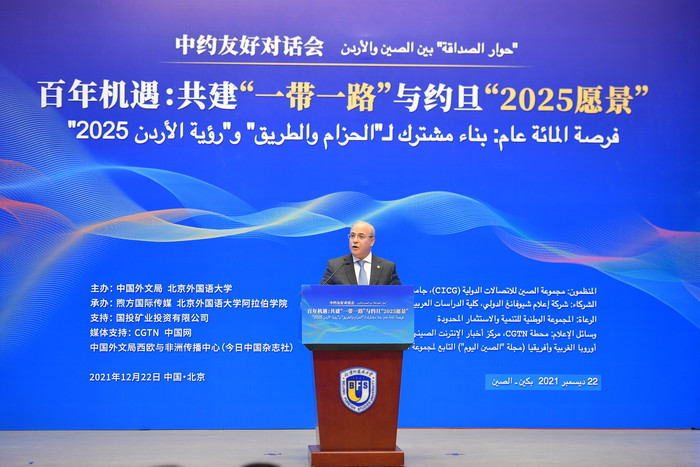 On December 22, Beijing time, the first China-Jordan friendly dialogue was held in Beijing. Themed by "Once in a Blue Moon: Joint Development of the 'Belt and Road' and Jordan's '2025 Vision'", the Dialogue was organized among the Chinese and Jordanian governments, experts and scholars in the fields of economy, trade, culture and education and industry representatives in cloud.

Chen Chuandong, Chinese Ambassador to the Hashemite Kingdom of Jordan, delivered a speech in the event. He noted that, since the establishment of diplomatic relations between China and Jordan in 1977, the two countries have witnessed continuous, health and stable development of mutual relations as well as more and more active exchanges at all levels and in all fields. China has become Jordan's third largest trading partner and second largest source of imports. In the future, both parties should consolidate political mutual trust and strengthen strategic communication; highlight complementary advantages and enhance mutual benefit and win-win results; strengthen people-to-people exchanges; and expand cooperation platforms and build a China-Arab community with a shared future.

Hussam A.G. Al Husseini, the Ambassador of the Hashemite Kingdom of Jordan to China, said in his speech that in the face of COVID-19, the mutual assistance of peoples from the two countries has encouraged each other. Jordan, a model country for peace and stability in the Middle East, boasts a good investment environment and high-quality human resources. Chinese enterprises have already cooperated with Jordan in the fields of traditional energy, renewable energy, and information technology. In the future, Jordan will continue to vigorously provide policy support and facilitate the development of Chinese enterprises.

Du Zhanyuan, President of China International Communication Group (CICG), stressed that seeking cooperation and development had become the common aspiration of all countries in the world, including China and Jordan. Both China and Jordan should focus on people's livelihood improvement, promote win-win cooperation, focus on future friendship, promote youth exchanges, expand dialogue channels and strengthen mutual learning among civilizations. CICG is willing to work with representatives from all walks of life in China and Jordan to jointly promote people-to-people exchanges between the two countries.

Bai Tao, Chairman of the State Development & Investment Corp., Ltd., said that SDIC Mining, as the largest shareholder of APC, had actively fulfilled its social responsibilities and contributed more than $600 million to the Jordanian Treasury and society. In the future, SDIC is willing to become a "reliable cooperative partner" and a "friendly cultural envoy" between China and Jordan.

At the event, Liu Dawei, Vice President of CICG, and Zhong Guodong, Deputy General Manager of SDIC, jointly presented A Bright Shared Future (Series I and II) to Chinese and Arab youth representatives; Yang Dan, President of Beijing Foreign Studies University, and ambassador Hussam A.G.Al Husseini jointly presented the book A Study on Culture and Education of Jordan to the youth of the two countries.