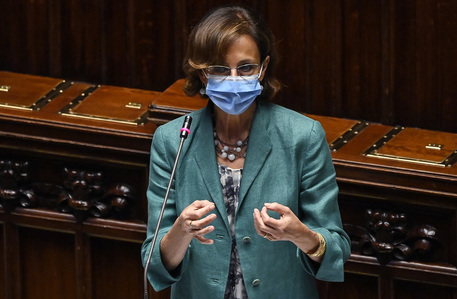 (ANSA) - ROME, JUL 21 - Justice Minister Marta Cartabia on Wednesday vowed a probe into last year's COVID prison riots in Italy and the means used to put them down.
Speaking to the House, she said inspectors would go to all the institutes where "the serious events of last March happened".
Last week Cartabia and Premier Mario Draghi visited a jail near Naples where 52 prison officers were arrested for alleged brutality in 'punishing' rioters in April last year.
After the visit, Draghi pledged that Italy's prison system would be reformed while Cartabia said such incidents would never happen again.
On Wednesday Cartabia said "we need a wide-ranging investigation to establish what happened in all the prisons in the last year when the pandemic exasperated everyone".
She said the prison officers' alleged brutality at Santa Maria Capua Vetere, which has emerged in CCTV footage, had been "premeditated".
The minister also told the House that prison overcrowding, an endemic problem, was getting worse.
Overcrowding and COVID fears sparked riots in several prisons at the height of the first lockdown last spring, when many inmates were hurt, and some died, mainly from overdoses of drugs pillaged from jail infirmaries. (ANSA).