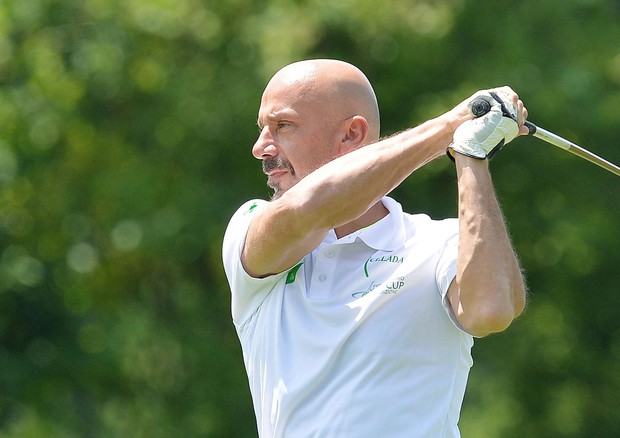 (ANSA) - ROME, MAY 23 - Italy's Vialli e Mauro Cup, a fundraising pro-am celebrity golf competition to raise money for research into ALS or Lou Gehrig's Disease set up by former soccer players Gianluca Vialli and Massimo Mauro, returned on Monday after a two-year absence due to COVID-19.
Professionals, celebrities and amateurs faced off at the 2023 Ryder Cup venue, the Marco Simone Golf & Country Club outside Rome, in the 17th edition of the event.
The competitors included former soccer players including Michel Platini, Laurent Blanc, Giancarlo Antognoni, Mauro Tassotti, Borja Valero, Christian Panucci, Simone Pepe, Alain Boghossian, Attilio Lombardo and Stefan Schwoch.
Also taking part were top golfers including Puglia's Francesco Laporta, Spain's Rafa Cabrera Bello, Scottish pair Stephen Gallacher and Scott Jamieson, and England's Ross McGowan, winner of the 2020 Open d'Italia.
Two special prizes were awarded too: the junior 'Buca 14' (14th Hole) in honour of late Dutch footballing legend Johan Cruyff, and the Promising Young Player Prize named after Teodoro Soldati, and Italian golfer who died at the age of 15, which went to Francesca Fiorellini, one of the best talents on the Italian youth scene.
Fiorellini, who turns 16 at the end of the month, recently won the 92nd edition of the Portuguese International Ladies Amateur Tournament.
"After a period that has been complicated and uncertain for everyone, also for those like us who are engaged in philanthropy, the key word is never give up," said former Samp, Juve and Italy star striker Vialli and former Juve player Mauro, who teamed up in 2003 to raise funds for research into Amyotrophic Lateral Sclerosis (ALS) or Motor Neurone Disease (MND), which has been found to hit former soccer players much more than the general population.
"This stoppage enforced by the pandemic has made us even more motivated than ever to pursue our goal.
"The causes of ALS are not known and there is no effective therapy to fight it but thanks to scientific research important steps forward have been made which have enabled us to better understand certain mechanisms underlying the disease, and so ensuring funds for researchers is the only hope for the patients".
So far the Fondazione Vialli e Mauro has raised and devolved almost four million euros for research into the disease, which in America is known for the baseball great who died of it at almost 38 in 1941, Lou Gehrig.
Presenting Partners at the event were RF Celada S.p.A. and ERG S.p.A., historic friends and supporters of the two former players' foundation.
In the latest research advance, an Italian study in January said the lack of an enzyme in the body causes the fatal nerve-wasting disease.
The study by Milan's Mario Negri Institute and Turin's Citta' della Salute, published in the journal Brain, shows that the lack of cyclophillin A induces the terminal condition.
Conducted in animal models and on humans, the breakthrough "could be a first important step towards developing a therapy," said the researchers.
"We have to go back to the lab and assess whether this is the right path to stop the onset and progression of the disease," said Mario Negri researcher Valentina Bonetto.
"If it proves to be so, it would be a very important first step towards developing a therapy for ALS".
ALS is a neurodegenerative disease that results in the progressive loss of motor neurons that control voluntary muscles.
The affected muscles are responsible for chewing food, speaking, and walking.
Motor neuron loss continues until the ability to eat, speak, move, and finally the ability to breathe is lost.
ALS eventually causes paralysis and early death, usually from respiratory failure.
There is no known cure for ALS, and the goal of treatment is to improve symptoms.
The disease became well known in the United States in the 20th century when in 1939 it affected Gehrig and later worldwide following the 1963 diagnosis of cosmologist Stephen Hawking.
The average survival from onset to death is two to four years, though this can vary, and about 10% survive longer than 10 years.
In Europe, the disease affects about two to three people per 100,000 per year.
It hits professional soccer players on average two times more than the general population and Serie A players are hit six times more, a study from Milan's Mario Negri Institute said in 2019.
There have been several high-profile cases in Italy of right-to-die ALS sufferers committing suicide due to the hopelessness and physical incapacitation of the condition, shifting the debate on assisted suicide and boosting parliamentary moves to legalize it.
The flag-bearer in Italian soccer's campaign to explain the high rate of Lou Gehrig's Disease among former players, ex-Fiorentina and AC Milan striker Stefano Borgonovo, died of the incurable nerve-wasting condition at 49 in June 2013. "Ciao Stefano, hero", tweeted former Fiorentina teammate and Italy great Roberto Baggio while ex-Juventus and Italy forward Alessandro Del Piero called Borgonovo on his Web site "a great fighter who loved soccer and life".
At the time of Borgonovo's death, other figures were released saying that the Lou Gehrig death rate among ex-players in Italy is 12 times that of the general population.
Top anti-doping prosecutor Raffaele Guariniello has been probing more than 40 deaths for nearly 20 years.
Doping, other performance enhancers, repetitive head trauma and pitch fertilizers have been touted as possible causes but scientists have yet to pin down the origin of the disease.
Former Chelsea boss Vialli, who recently recovered from cancer, and former Sky TV pundit Mauro, teamed up with the aim of helping solve the riddle and achieve effective treatment.
(ANSA).