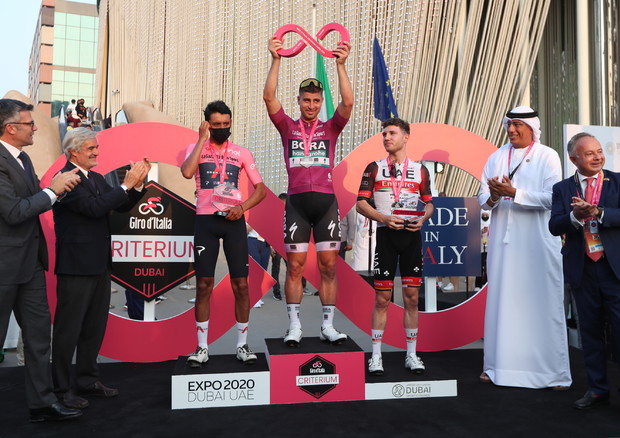 (ANSA) - ROME, NOV 8 - Slovakia's Peter Sagan won the first Giro d'Italia Criterium at Expo Dubai 2020 at the weekend.
RCS Sport Managing Director Paolo Bellino voiced his satisfaction to ANSA at bringing the Giro to the Expo, noting that it is the first sporting event to have taken place inside a Universal Exposition.
"We did it at the Italian Pavilion which represents all the excellent things in our country, including sporting ones, where the Giro d'Italia is top of the top," said Bellino, praising the work done by Expo Commissioner Paolo Glisenti and foreign trade agency ICE in the UAE.
Sagan said "this was a very special race; it's incredible to be here and have a chance to race the Giro d'Italia in Dubai and I'm over the moon at this win".
The Criterium was the first event of the classic round-Italy stage race to ever take place outside Europe.
The Giro is the world's second greatest stage race after the Tour de France.
The Giro d'Italia Criterium Dubai was a fully fledged cycling competition, as a time trial separate from the Giro, inside the Expo area.
It was a unique event, 30 fast 2.1km laps for a total of just over 60km, featuring top riders like Geoffrey Bouchard, Sagan, Egan Bernal, Filippo Ganna and Elia Viviani.
All seats at the Padiglione Italia have been taken, and the congress was full of the heads of the Dubai Sports Council.
Glisenti said the event was "exceptional" both for the Expo and for the Giro too.
"Cycling brings people together, cycling is beauty, that's why we are bringing it to Expo, following the claim of our participation in the Universal Exposition. Furthermore, the Giro d'Italia symbolically represents exploration, knowledge and the link between populations, that's what the Giro d'Italia has always been: it has a cultural, social, and economic meaning, as well as a sporting one".
The chief development and delivery officer of Expo Dubai, Ahmed AlKhatib, stressed that the Giro d'Italia was one of the top features of the 'Made in Italy' system.
He said the Dubai officials had learned a lot from Italy, starting from Expo 2015 di Milano, in order to create the first Expo in Middle East.
"Every day we learn from the experiences of others and we try to bring the best of the world to Expo," says AlKhatib.
"That's why we are proud to host the Giro d'Italia in Dubai in this format, which will be among the most attractive events at this Expo". (ANSA).