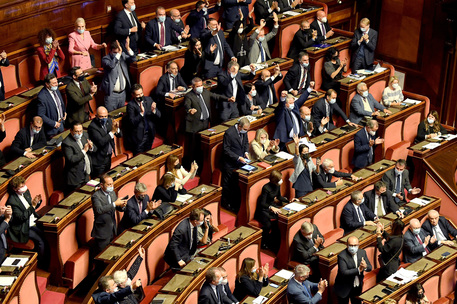 (ANSA) - ROME, OCT 27 - The floor of the Senate on Wednesday voted to halt examination of the articles of a homophobia bill and the amendments presented to it, effectively blocking its progress through parliament.
The motion to halt the so-called Zan bill, requested by the right-wing League and Brothers of Italy (FdI) parties, was approved in a secret vote in the Upper House with 154 Senators in favour, 131 against and two abstentions.
The Lower House had approved the bill, backed by the centre-left Democratic Party (PD) and the 5-Star Movement (M5S), among other groups, in November 2020.
Attempts to reach an agreement that would see the bill, filed by PD member and gay activist Alessandro Zan, get broad support failed earlier this week.
The Vatican intervened in relation to the bill earlier in the year, expressing concerns that it could breach the Lateran Treaty that regulates relations between the Italian State and the Holy See/Catholic Church.
The Vatican and conservative Italian political parties are worried that the bill could curb freedom of expression, in part because it allegedly leaves areas open to interpretation by courts because it is too vague.
Zan and the rest of the PD argue that the bill would not crimp freedom of expression, and Catholic conservatives would still be able to state that they find homosexuality sinful.
The bill would make homophobia an aggravating factor in acts of violence or discrimination like racism already is.
The bill would also set up an anti-discrimination day that private Catholic schools would be expected to take part in.
(ANSA).