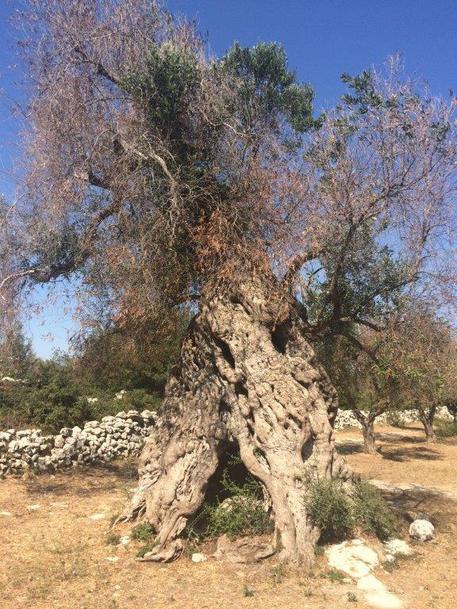 (ANSA) - BRUSSELS, APR 29 - It is necessary to maintain a high level of surveillance to prevent Xylella fastidiosa contagion while continuing to work on resistant olive cultivars and research into new possible treatments with the anti-bacteria viruses discovered in Spain - these were the elements that emerged during the final conference of XF-ACTORS, an EU-financed project devoted entirely to the plant pathogen.
The project brought together researchers from 29 organizations from 14 countries around the world, with with Bari's IPSP Institute for Sustainable Plant Protection of the National Research Council (CNR) playing a lead role.
"Combining different instruments, such as statistical models, images taken from above and sensors, could boost the early detection of infection," said IPSP-CNR's Maria Saponari, the coordinator of the international research project.
"Surveillance remains essential for prevention while research continues into the resistant varieties and encouraging new roads for treatment open up".
These include microorganisms capable of wiping out the Xylella fastidiosa population of infected plants, which were identified for the first time by a group of researchers from Valencia, Spain.
If the subsequent phases of experimentation confirm these results, these microorganisms could be used in products for the biological control of the bacteria.
The XF-ACTORS scientists carried out in-depth studies on the role of the meadow spittlebug in the spread of the bacteria, gathering, for the first time, data about the cicada's life cycle, its feeding habits and the vector's communication methods in order to create sustainable systems of population control and provide input to improve the forecast models for the spread of the bacteria that are useful to the plant-health authorities to set up effective territorial inspection activities.
As part of the XF-ACTORS project, researchers managed to date the presence of Xylella fastidiosa in Europe to the 1990s, earlier than previously thought, with traces in the Balearic Islands and in Corsica of a subspecies different to the one in Puglia.
The data presented at the conference showed that Xylella is not the same all over Europe and the Puglia strain is the most aggressive discovered so far anywhere in the world.
The data also shows that olive tress resist infections of the strains found in Spain and similar ones in Corsica, Portugal and Tuscany.
The video-convention will be followed on Thursday and Friday by the third European conference on Xylella fastidiosa, organized bt EFSA.
The week of meetings enables scientists to take stock of six years of EU-financed research, which started in 2014 with the POnTE project. (ANSA).